Lots of music — especially pop and electronic music — is based around loops. We propose a way to identify and extract the loops that occur in a song, and to provide a map of the piece, all in a single optimization! To do so, we use nonnegative tensor factorization.

The main steps of the procedure are:

Instead of factorizing the spectrogram directly, which is the typical approach, we first estimate the downbeats of the song (using Madmom), and divide the song into separate bars.

Now we can stack the windows in a third dimension: 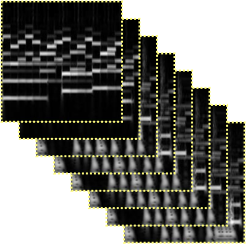 Now we have a solid 3D volume—a “spectral cube”—and we can factorize this to analyze the song. 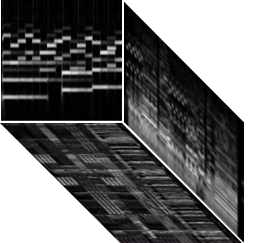 Why would it benefit us to factorize the spectral cube instead of the spectrogram? Factorization is all about discovering redundancies in the signal and using them to compress it. E.g., steady-state notes can be expressed more compactly as a single note template repeating in time; that’s what basic nonnegative matrix factorization (NMF) takes advantage of. Some notes may have similar templates, but shifted in frequency; that’s what shift-invariant NMF aims to exploit.

In our case, we note that musical signals repeat not just by arbitrary shifts in time and frequency (the dimensions of the spectrogram), but in a deliberately periodic way with respect to the beats and downbeats—i.e., the third dimension of our spectral cube. By factorizing the spectral cube, we can exploit these redundancies.

To understand the spectral cube, it helps to visualize it more fully.

How can we visualize a 3D volume? To look inside a person’s head, radiologists might use a CAT scan, capturing many 2D cross-sections of the head and concatenating them into a video.

These slices can be taken along any dimension; below are CAT scans taken (1) back to front, (2) left to right, and (3) bottom to top.

Similarly, we can look at cross sections of our spectral cube along any dimension. Below are three views of El Pico, taken:

The Tucker decomposition is a way to compress a 3D dataset. As seen in the diagram below, it decomposes the spectral cube (of dimension MxNxQ) into three separate sets of 2D templates (W, H and D), and a small “core tensor” (C). Taking the outer product of the core tensor with each of the templates returns an approximation of the original spectral cube. To estimate the Tucker decomposition, we use TensorLy.

What’s nice about this approach is that all the templates W, H and D have intuitive musical meanings. 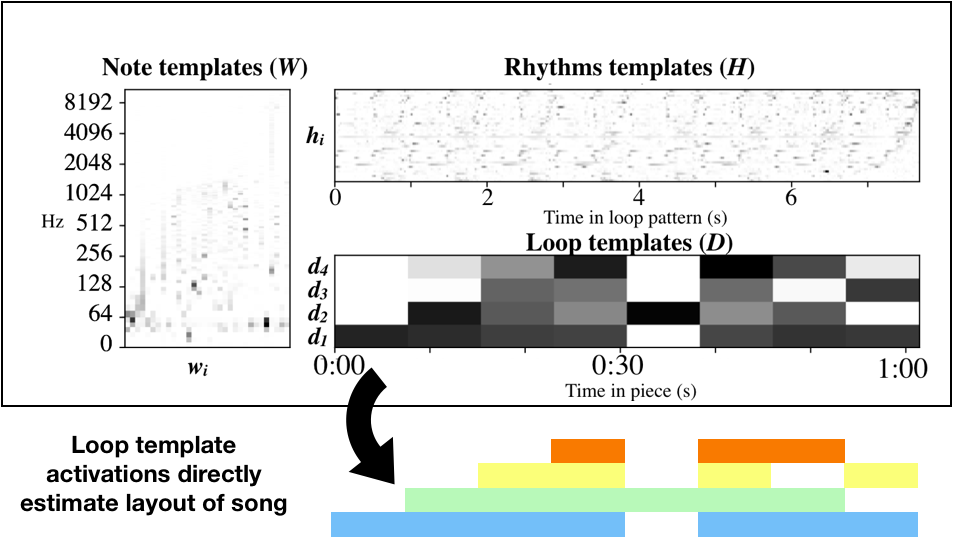 Thus, D is a direct estimate of the structural layout of a piece, showing when each loop of each type appears. This is seen in the example above, where D clearly matches the original layout, shown in colour.

What are the “types” of loops? That’s what the core tensor is for: it has one row per note, one column per rhythm, and one layer per loop type (see example below). Thus, each layer is a kind of loop “recipe”, showing what notes to include with what rhythms. 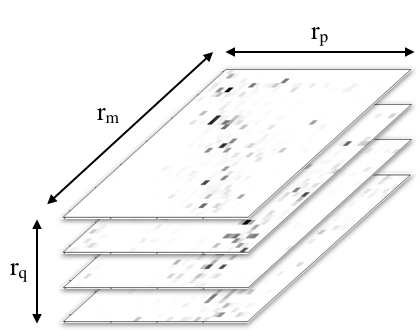 This is different from typical NMF, which estimates a signal in terms of note templates W and activation functions H, but where each column of W is paired with a single row of H. The core tensor is a kind of “mixing cube” that allows the loops to share note and rhythm patterns. This is important because it is not the rhythms and notes that are unique to each loop, but the way they are combined.

Once the Tucker decomposition has been estimated, we already have a layout of the piece. To actually separate out the individual tracks, we simply multiply the estimated templates together with the core tensor—but only keeping the layer of the core tensor we want to use—and then re-arrange the spectral cube back into a 2D spectrogram. Then we can convert that estimated spectrum back into an audio signal.

Here is an example of a set of source loops and versions of them automatically separated from a mixture:

The audio examples are borrowed from a paper by Patricio López-Serrano.